We had the pleasure of welcoming Kimberley Long, Asia Editor for The Banker –  Financial Times Group to TFA on Monday 14th  November.  Pupils in Year 11 to Year 13 from Business Studies, Economics, Media and English Literature  were inspired by Kimberley’s talk as she led them through her personal journey starting with her school life , through to university  and eventually finding her dream career in financial journalism.  Born in Liverpool, Kimberley attended an all-girls state school before studying English Language and Literature at Liverpool University, and an MA in Print Journalism at Sheffield University. In between she worked in Japan for a year on the JET Programme, teaching English to senior high school students.

Now based in London, she has worked in business and finance journalism since 2012, first at Euromoney and now The Banker, where she focuses on the Asian markets. Her job sees her travel regularly to Asia. Her role requires her to produce written features covering banking and the economy, and conduct video interviews with central bank governors and finance ministers. Kimberley spoke with passion about her background not being a barrier to success as long as you work hard and pursue your goals.  Kimberley also spoke how it is important  to develop interests outside of work and also to give back to your local community – she is an avid reader, and volunteers with a number of charities including Hackney Quest and Hackney Night Shelter.  Our pupils were given a lot of food for thought and were so engaged with the Q&A that they were reluctant to let Kimberley leave!

Diya Patel a Year 11 Business pupils said , ‘The talk really inspired me to take a bigger interest in business. What was really interesting was that Kimberley spoke about having many jobs before she found the right one for her . Her favourite part of the job is that she gets to travel and meet new people and hear their different ideas around the  world.’ 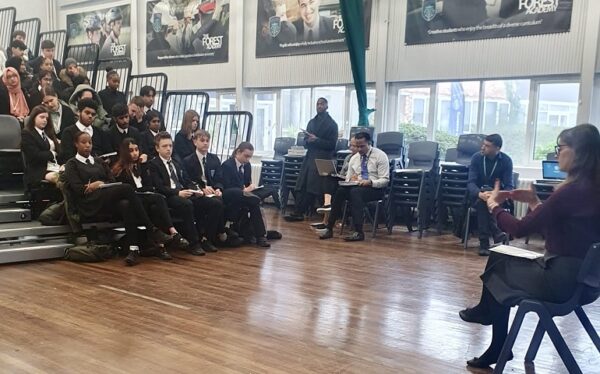