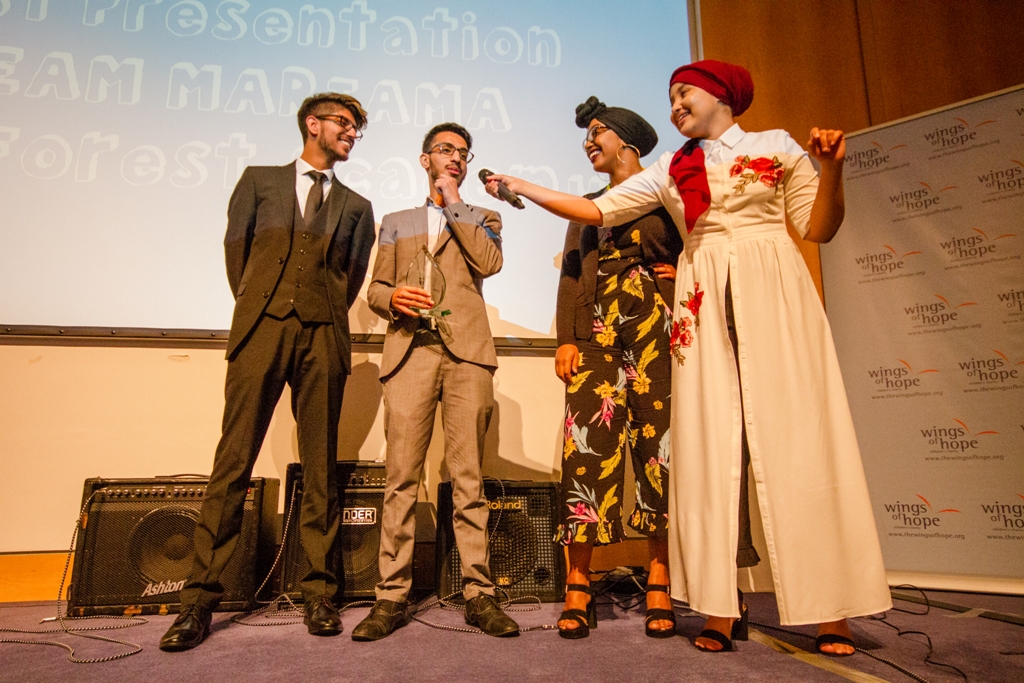 These six year 13 students have been participating in the national social enterprise competition the Wings of Hope Achievement Awards over the last few months, in which UK students develop their skills in project management and creativity, whilst raising funds for underprivileged students in India and Malawi. As well as completing their A level exams this June, team Mariama were recognised for their efforts at the WOHAA Annual Awards Ceremony on Thursday 28th June as the winners of the Best Presentation Award, meaning they will receive an organised work experience placement. The team were presented with this award by Dr Tahoun of the London Business School.

As part of their fundraising, the team sold refreshments at the Autumn term open evening, and organised a disco for the year 7s. They put their promotional skills to the test by creating and releasing a promotional video, and using their social media accounts to the full measure. Bucket shaking in Oxford Circus in December tested their determination, and they also organised a non-uniform day at school. In January, they were one of three teams who attended the Wings of Hope Back to School Day on special invitation, to sell in the Tuck Shop at an event which saw 300 professionals and students hear talks from household names such as Professor Robert Winston, long-standing civil servants such as Lord Robin Butler, and pop culture figures such as Michael Dapaah. Their flagship event was a multicultural evening, celebrating the range of diversity at the Forest Academy by showcasing student talent in song, dance, poetry, and fashion, with performers and audience members from years 7 to 13. Parents and teachers also enjoyed the show, with the team providing refreshments, and inviting a Wings of Hope representative in to address the audience. In May, they were one of 24 teams invited to the Houses of Parliament for the WOHAA Semi Finals. There, they had to present their project to a panel of esteemed judges, including representatives from London Business School and the UK Co-CEOs of acclaimed tech company NextJump, competing against teams from Liverpool, Bristol, Switzerland, and across London. It was here that they truly showed their unique character – enacting their WOHAA journey through their superhero alteregos, it really was a presentation that made an impact! Team Mariama will now join the 32,000 other students who have participated in WOHAA over the last twelve years, and the Wings of Hope are very proud of their success.